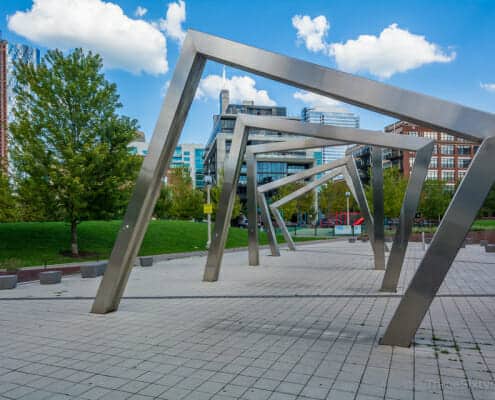 Here are the latest West Loop apartments, condos, lofts, townhomes and single family homes for sale. And this week’s West Loop open houses. Plus everything you need to know about living in the West Loop.

Learn About Living In The West Loop

See Areas Within The West Loop

Talk With Us About West Loop Real Estate

West Loop Condos And Lofts For Sale By Price

Use these quick searches to find West Loop condos and lofts for sale by price range. This also includes West Loop apartments for sale.

West Loop Condos And Lofts For Sale By Building

Here are some of the more popular condo, loft and apartment buildings in the West Loop. The neighborhood continues to develop at a rapid clip and there are many more buildings to consider. We recommend browsing these buildings as a starting point. Our brokers know all the West Loop buildings well and can assist you with buying, selling or renting in any building.

West Loop Condos And Lofts For Sale By Location

Below we’ve compiled a few searches to help you quickly find West Loop condos and lofts that meet your locational needs. This also includes West Loop apartments for sale. We will happily create a custom search that emails you new listings meeting your criteria as soon as they hit the market. Just ask!

In addition to the many start-ups, major employers in the West Loop or nearby include Google, McDonalds, Twitter, Boeing and Pepsi. Here are some quick links to current West Loop apartments for sale and for rent near these key West Loop employers.

Commuters like the neighborhood because Chicago’s two major train stations, Union Station and Ogilvie, are very close by for easy Metra access. As are the multiple CTA train stations (Blue line, Green line and Pink lines). This makes taking a trip to O’Hare or Midway super convenient.

Here are some tips for getting around Chicago. And below you’ll find West Loop apartments for sale and for rent near the major transportation hubs in the West Loop.

The two public schools in the West Loop are Whitney M. Young Magnet High School and the Mark T. Skinner Elementary School. Both are very highly ranked. Other neighborhood schools include The Gardner School of Chicago, Montessori Academy and Saint Patrick School.

Of course many families want to live within walking distance to their children’s school. So here we’ve made it super easy to find West Loop real estate listings near neighborhood schools. When we say near we mean within a 2 or 3 block radius of each school. And you have the ability to adjust the map to meet your needs.

Here are the latest West Loop apartments for sale and for rent near West Loop schools.

Here are all current West Loop rentals. You can also check out our Chicago Rental Guide. It includes all the latest Chicago rental listings and info on our free Rental Match Service.

Here’s the latest West Loop Market Report. It’s a great way to quickly understand what’s happening in the market. View charts showing the average sale price, average market time, number of listings on the market and the average percent of original price for residential real estate sold within the past year. Updated daily!

Living In The West Loop 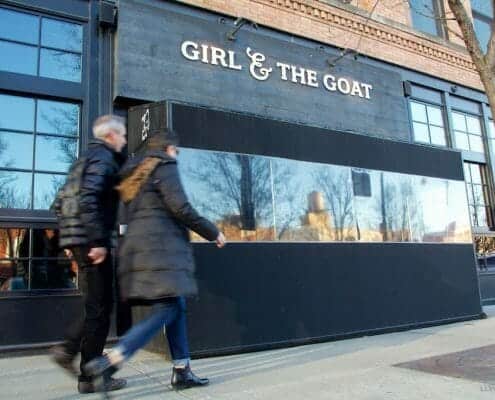 Foodies flock to the West Loop. Home to many of Chicago’s best restaurants.

Contributing to the neighborhood’s success are factors like world-class restaurants, green space, premier employers, easy transportation, great schools, vibrant art scene and all around walkability. If fact, the West Loop is one of the best walkable Chicago neighborhoods.

Let’s explore each of these factors in a bit more detail.

Foodies love the West Loop. And for good reason! Over the years the area has been host to some of Chicago’s best new restaurants. Initially this was because rents were low and upstart Chefs could afford to actually open a restaurant in one of the old warehouse spaces here, now rents of these spaces are higher but the trendy restaurants somehow keep opening. Here are some of the notable West Loop Restaurants.

The neighborhood also has plenty of parks for kids and dogs. The largest park in the West Loop is Skinner Park. Situated in the west part of the neighborhood, here you’ll find tennis courts, baseball fields and plenty of wide-open spaces to get outside and enjoy Chicago.

In the east section of the neighborhood is Mary Bartelme Park. It’s the newest West Loop park and offers a dedicated children’s playground, a great lawn and a fenced dog park where dogs can run off-leash. Explore Mary Bartelme Park.

Attention dog owners, read why the West Loop is now one of the best neighborhoods for dogs in Chicago!

Chicago’s West Loop is home to more art galleries than most other neighborhoods. Since the Best Chicago Properties office is located in the West Loop we’ve enjoyed supporting the neighborhood art scene with our own art events.

And, while the West Loop has plenty for art lovers, as you by now know, there’s really something here for everyone.

These success factors are enhanced by the various areas within the West Loop. Let’s take a look at a few of the more popular areas.

There are quite a few distinctive micro neighborhoods within the West Loop. Here we discuss three of our favorites; Fulton Market, Jackson Boulevard and Greektown. 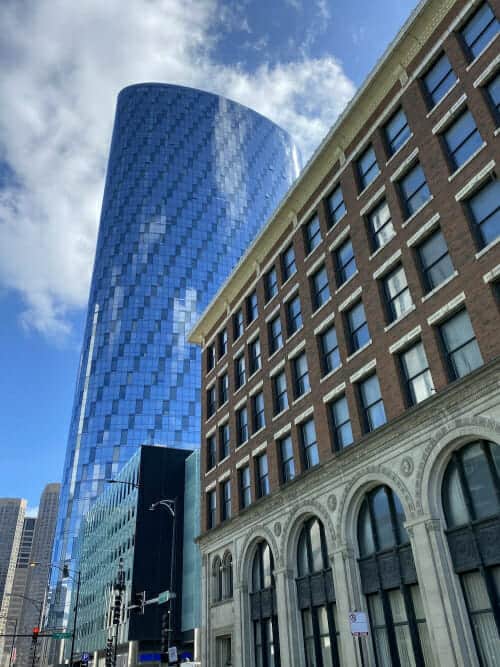 Luxury apartment tower at 727 W. Madison perfectly demonstrates the contrast and also the complementary nature of the old and new architecture transforming the West Loop.

Situated along the north side of the West Loop is Fulton Market. It is the oldest market district in Chicago and features historic buildings where wholesale produce and meat packing outlets still operate today.

But these days most of the old buildings have been renovated for re-use. Many excellent restaurants and hotels have joined the urban mix.

While there are a few warehouses still in use, now there’s Google’s midwest headquarters and a bevy of trendy new restaurants, coffee shops and art galleries.

And of course there are contemporary condos and industrial loft spaces. Plus, on any given evening on Randolph Street you’ll see diners dressed for an evening out arriving in style.

Here’s where Chicago (plus nearly every visitor to Chicago!) comes to dine. Learn more about Fulton Market.

An often overlooked area of the West Loop is the Jackson Boulevard District.

Sitting quietly in the south-west corner of the neighborhood, the area is all that remains of an important 19th Century residential district.

The houses, as well as the Church of the Epiphany were built in the Italianate, Queen Anne, Second Empire, and Romanesque Revival styles.

Located just west of Downtown Chicago on the east side of Chicago’s West Loop, Greektown is a dining and nightlife district.

For years this area has been a popular destination for tourists as well as Chicagoans. Here you’ll find a collection of Greek establishments including restaurants, bakeries and cafes. But it’s more than just gyros and flaming cheese …Opa! Chicago’s Greektown also has contemporary condos and lofts, a Starbucks, a Walgreens, The National Hellenic Museum and the ever popular festival A Taste of Greece.

And finally, one of the defining factors in favor of living in the West Loop is the diversity of architectural styles.

But it really all began with West Loop loft conversions. Below we’ll take a walk through the variety of loft styles you can find in the neighborhood.

Let’s take a closer look at the three basic types of lofts you’ll find in the neighborhood. 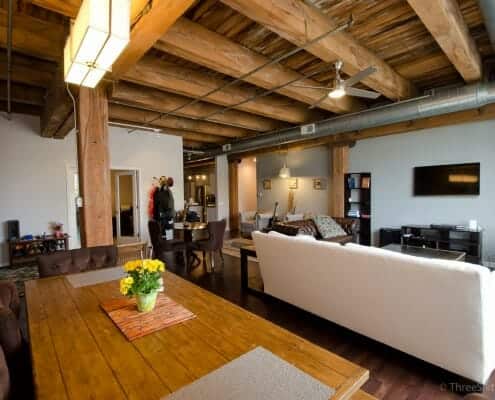 West Loop brick and timber lofts are what most people think of when they think of buying an authentic loft.

You know, the classic loft with exposed brick and massive timber beams. And super high ceilings and huge old windows. Perfect light for a photographer’s or artist’s loft but also just right for every-day living.

If you’re thinking of buying a West Loop brick and timber loft there are some important considerations.

For example, old wood floors are not all created equally. Some don’t have much sound proofing in between. So if you have low tolerance for noise think twice.

And old loft buildings can be subject to massive special assessments so buyer beware.

If you want to buy a West Loop loft and love Chicago brick and timber lofts No. Ten Lofts just might be for you.

Many West Loop concrete lofts have a storied history. Many housed manufacturing facilities where the machinery required stable flooring.

Like Singer Lofts where they made Singer sewing machines. And Haberdasher Square Lofts where Hart, Schaffner Marx made fine quality suits. Both examples of authentic lofts.

And many were built to house printing presses. Most of those are located in Chicago’s Printers Row neighborhood.

West Loop concrete lofts have some features that some buyers prefer over brick and timber lofts. For example, they tend to be less noisy. And they tend to be brighter given their higher ceilings and larger windows.

Ok, so what exactly is a West Loop soft loft? They are basically a cross between a condo and a loft. The best (or sometimes the worst) of both worlds.

On the plus side, a soft loft is typically newer than a timber or concrete loft but with some of the same features. The idea was to provide the loft vibe but with lower maintenance. They typically offer features like 10-11 ft. exposed concrete ceilings. And floor to ceiling windows to bring in the light.

On the minus side, some buyers don’t like soft lofts because bedroom walls do not go all the way to the ceiling. This is of course a bummer for privacy. Plus many don’t even have bedroom doors. Yikes, even more privacy and noise issues.

West Loop developers were building a lot of soft loft buildings from 1999 to 2006. So there are many soft lofts in the West Loop and some are constructed better than others.

From our West Loop office we’ve enjoyed helping our clients in the neighborhood since 2007. It’s never too early to get started!