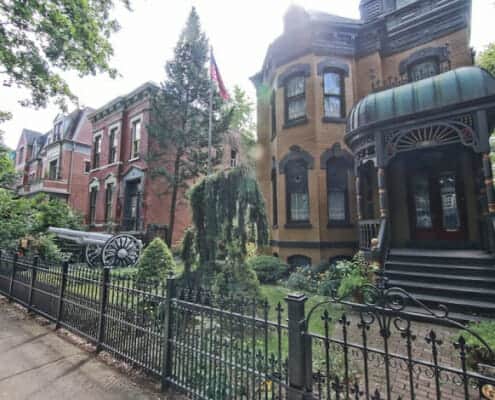 There’s always an interesting blend of hipsters, artists and people who just want to enjoy the vibe. Whether you prefer to buy your clothes at resale shops or fashionable boutiques, you will find what you seek in Wicker Park.

No need to leave the neighborhood for entertainment. There is a huge variety in dining, live music, coffee houses, and galleries here.

More On Living In Wicker Park

Chicago’s a city famous for its historic neighborhoods. Often named for their local community park, our neighborhoods boast their own local pride, secret eateries, and unique experiences.

Living in Wicker Park provides access to all that and more. A place Forbes called “the 4th hippest neighborhood in the country” in a 2012 article, today it’s home to budding artists, emerging musicians, and brilliant mixologists. Wicker Park’s rich history is steeped in color.

In 1868, the Chicago Board of Public Works expressed interest in building a park “lying west of Milwaukee Avenue and south of North Avenue.” Then-alderman Charles Wicker, along with his brother Joel, purchased 80 acres of land in the area. They began laying out various subdivisions of mixed sizes surrounding the four-acre park. 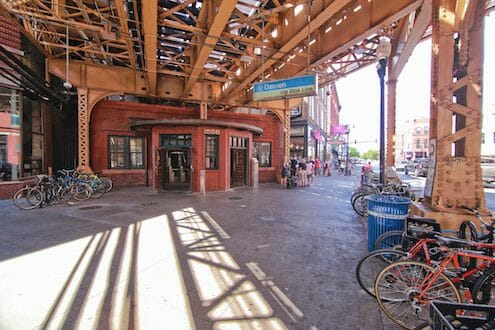 This proved prescient, as the Great Fire of 1871 saw the area’s first large wave of incoming Chicagoans looking for new homes. Before the end of the 19th century, Wicker Park became home to many of Chicago’s Northern European immigrants. For example, the wealthier merchants and brewers. So much so that Hoyne Ave was known as “Beer Baron Row”.

A Bastion Of Freedom

Perhaps a harbinger of the countercultural artistic spaces that call it home today, Wicker Park also served as a bastion of freedom for Poland throughout both World Wars. In the early 20th century, the provisional government of Poland met in Wicker Park. Later, during and after World War Two, upwards of 150,000 Polish immigrants moved into the area.

Along with them came the unique Renaissance and Baroque Revival style cathedrals that dot Chicago today. This history is reflected in the architecture of Wicker Park real estate. For more about the neighborhood preservation and development visit the Wicker Park Committee.

The second half of the 20th century saw a dramatic shift in Wicker Park’s demographics, as Hispanic and Latino residents moved into the area. This while moving away from the expansive urban renewal projects that dotted Old Town and Lincoln Park during that time. With them came a colorful new flavor of sights, music, art, and food. For them, living in Wicker Park meant new freedoms. 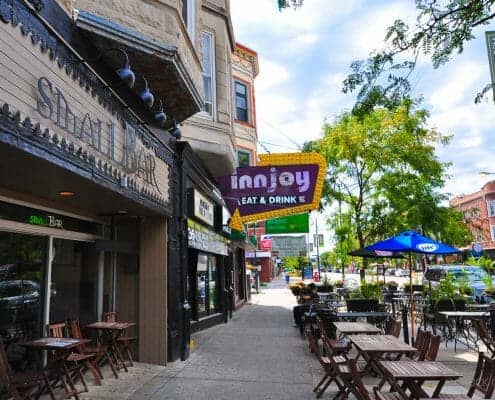 Over the years, Wicker Park’s been a hub of activity and history that’s cemented its place as one of the best Chicago neighborhoods. And certainly one of the most exciting.

In more recent history, the neighborhood has become attractive to young adults looking for a balance between city living and social interaction. Perhaps nothing was more indicative of this clash between newcomers and rooted populace than the 2001 taping of MTV’s The Real World and the protests it spawned. But, as the saying goes though, all publicity is good publicity. The neighborhood and Wicker Park real estate benefited.

Art & Music Are Right At Home In Wicker Park

As Wicker Park increasingly found itself on headlines and newscasts around the country, more and more people have flocked to its streets. The results have been a flurry of art and music. Plus new and upscale boutiques and eateries catering to its varied populace. And increasing interest in Wicker Park real estate.

For instance, every first Friday of the month, the Flat Iron Building opens its studio doors to collectors and shoppers. Ostensibly free with a suggested donation of $10, the event gives local artists and crafters a chance to showcase their creations and make a living from their trade.

Musicians often rejoice at the influx of talent and stars that simply “pop into” Reckless Records. Whether to sign autographs, promote a new album, or simply mingle with diehard music fans, the iconic business has hosted artists ranging from Arcade Fire and Vic Mensa, to Iggy Pop and The Cure in its day.

Wicker Park doesn’t simply make a list of the best Chicago neighborhoods for its historic places; it’s constantly evolving and adding new locations. Bourbon on Division is a great example of updated fare. Boasting a brunch menu that will leave you cursing a lack of more weekend days (try the fried chicken and waffles), their “Helluva Way to Wake Up” cocktail will leave you considering taking a “personal day” on Monday. 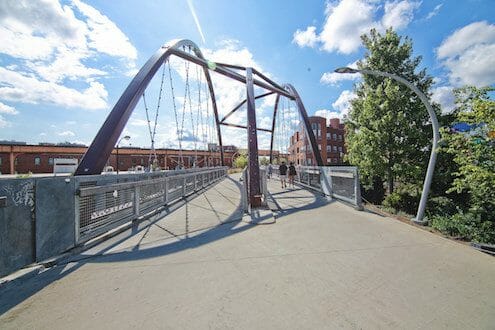 Escape to the Bloomingdale Trail!

Escape To The Bloomingdale Trail

If you need a place to escape the hustle of street level, living in Wicker Park offers you easy access to the elevated Bloomingdale Trail. Built on the remains of an old rail line, the Trail offers residents and visitors a chance to rise above the traffic and get a breath of fresh air. As a bonus, volunteer docent John Paige offers walking tours of the trail that flesh out the history of this rail line-turned-rec park. The Bloomingdale Trail is one reason Wicker Park is one of the best bike-friendly neighborhoods in Chicago. It also helps make it one of the best walkable Chicago neighborhoods.

Of course, sometimes we don’t want to escape. For those of us who prefer beign trapped, you can indulge in Escape Artistry’s latest creation: the Duck & Cover Classroom. Set against a 1950s backdrop, the experience is rooted in the Manhattan Project’s classified work at the University of Chicago. This escapists dream is a must-try event for couples and groups alike; we’re told it’s the bomb.

Wicker Park’s status as one the best Chicago neighborhoods isn’t magic. Except when it is. For fans of optical illusions and sleight of hand, check out Brett Schneider’s vaunted “Communion: An Evening of Magic” at the Den theatre. Many residents feel living in Wicker Park is pure magic.

Wicker Park real estate is prime for those looking for a thriving market or great investment opportunities. Boasting some of the best elementary and middle schools according to Trulia, Wicker Park makes a great home for young families.

Best of all, for many Wicker Park condos are still affordable. Median home prices of around $530,000, or $490/sqft, continue to make Wicker Park an attractive purchase.

Investors and families alike can count on a median rent of $2,960/month. Coupled with an area that has 42% homeowners, Wicker Park has something for whether you’re looking to grow your family or build your business.

That said, prices have been on the rise. To see current pricing trends, view the Wicker Park Market Report. Wicker Park is located in zip code 60622.

If you like the vibe of Wicker Park, then you may also wish to explore Bucktown, Ukrainian Village and Logan Square.

Want to learn more about living in Wicker Park? Thinking of buying a Wicker Park condo? We are neighborhood experts and are here to help you when you’re ready.