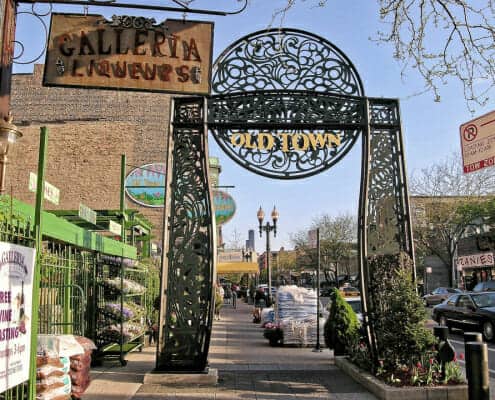 Chicago Old Town real estate is mostly vintage. However, there is also a nice mix of cottages, row houses, condos, and two-flats.

Not to be missed is the historic Old Town Triangle. It’s a section of row houses on cobblestone streets that gives people a flavor of old Chicago.

Have a question? Ask us!

When talking about making a life in Chicago’s urban center, the topic of Old Town usually comes up.

The area itself traces its roots to Chicago’s earliest denizens. But today Old Town boasts trendy eateries that rub their big shoulders up against classic Victorian architecture.

Before the arrival of European immigrants, Old Town was home to the Potawatomi, Miami, and Illinois tribes. 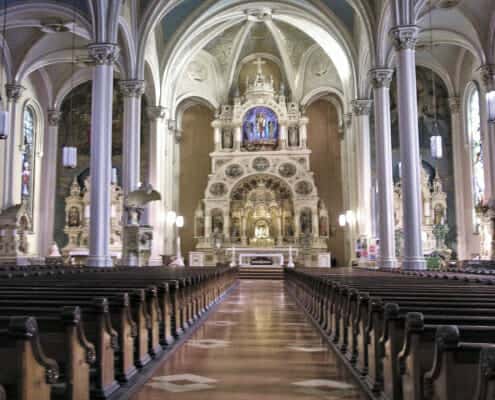 A precursor to Chicago’s role as a hub of trade and commerce, these tribes were recorded to have been using the area as a trading post.

Then, shortly after the turn of the 19th century, the Treaty of Chicago forcibly removed them.

Next, the Old Town area was settled by German immigrants. Moreover, St. Michael’s church stands as a monument to these early European colonizers.

Originally built by Bavarian immigrants, St. Michael’s was one of only a handful of structures to survive the Great Chicago Fire.

You’ll need to become accustomed to the unique pattern of Old Town streets.

For instance, Old Town’s streets are among the few in the city that do not adhere to Chicago’s famous grid pattern.

You might wonder why Clark Street follows a somewhat irregular line. It’s because it runs along one of the area’s earliest roads that followed a ridge alongside Lake Michigan.

Old Town’s only El stop, servicing the Brown & Purple Lines, is on North Sedgwick. Sitting in the heart of Old Town, this El stop is among the oldest in the city and one of the few original stops still standing. It was built in 1900.

Living in Old Town means being a neighbor to the Henry Gerber house. Named in honor of its owner, this piece of Old Town real estate was the home of the Society for Human Rights: the first gay rights organization in American history.

This fabulous bit of trivia is all the more incredible when one understand it was founded in 1924.

The Henry Gerber House was named a Chicago Landmark in June 2001. Then a National Historic Landmark 14 years later. And it still stands today at 1701 N Crilly Ct.

Following the white flight of the 1950s, many of Old Town real estate’s gorgeous Victorian homes and storefronts were left vacant.

Consequently, the area became home to three unique groups searching for a place in the Second City.

First, Old Town became the unofficial basecamp for hippie culture in the Midwest.

Next, a sizable community of Puerto Ricans put down roots along the north and west corners of the neighborhood.

Finally, Old Town’s real estate was the chosen home of the newly out homosexual culture.

So when such a variety of people who called Old Town real estate home came together, many of Chicago’s most famous institutions came into existence.

For example, ubiquitous city names like The Second City, Old Town Ale House and the Up Down Tobacco Shop all emerged during this period.

Most of these icons still call Old Town home today, even if they’re not exactly in the same spot where they started.

Similarly, the Old Town School of Folk Music first opened its doors during Chicagos revival of the genre. It saw singer-songwriters such as Bonnie Koloc, Bob Gibson, John Prine, and more grace its halls and the surrounding venues.

From the Old Town School of Folk Music came other venues for artists to ply their trades.

An exciting place to live

Perhaps the best way to conclude a write up of Old Town real estate is with a description of living in Old Town from 1967. Penned by Richard Atcheson for a write-up in Holiday Magazine, the colorful biography still rings true today:

“There is a little piece of Chicago Real Estate, west of Lincoln Park, that is the pride of urban conservationists and the despair of bulldozers. It is a community widely known as Old Town… full of conflict, full of life; a sometimes maddening but always exciting place to live.”

Just let us know if you’re interested in living in Old Town, or have questions about buying or renting Old Town real estate!