You are here: Home1 / Neighborhoods2 / New East Side 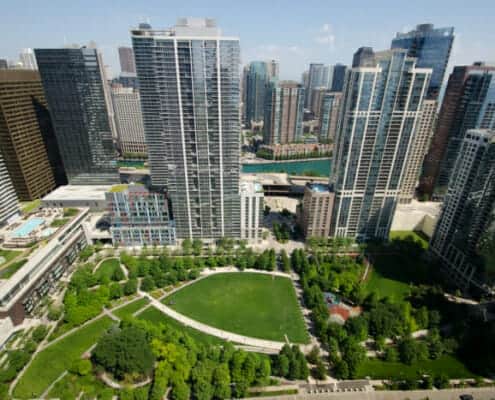 Here are some of the more popular New East Side condo buildings. Of course there are many more buildings to consider but these three are a good place to begin. Our brokers know all the New East Side buildings well and can assist you with buying, selling or renting in any building.

What’s Best About Living In Chicago’s New East Side

First things first, living in New East Side means you’ll never want for something to do.

Here you’re within walking distance of many of the mainstays that make Chicago a tourist mecca. Whether you’re an art critic or a budding botanist, you can make your way to the nearby museums and public gardens.

“Relatively new by Chicago’s standards, Chicago’s New East Side is characterized by stunning architecture, a central location, amazing park access, outstanding amenities and quiet corners. It is both accessible to the staples of Chicago life and removed enough to feel like quiet place to call home.”

The neighborhood is located in a mixed-use district bordered by Michigan Avenue to the west, the Chicago River to the north, Randolph Street to the south and Lake Shore Drive to the east. The zip code here is 60601. It is one of the best walkable Chicago neighborhoods.

Once a jumble of crisscrossing train tracks set against a magnificent lakeside view, the area housing New East Side real estate didn’t receive it’s moniker until the 1980s. Prior to that, the area was the primary staging and receiving area of the famous 19th century Illinois Central Railway.

The first land grant railroad, this rail system was responsible for united Midwest and mid-South commerce with the rest of the nation. The IC, as it was known, connected Chicago to such places as Sioux City, Omaha, Mobile, New Orleans, and more.

Living in New East Side means you’ll never want for something to do. You’re within walking distance of many of the mainstays that make Chicago a tourist mecca. Whether you’re an art critic or a budding botanist, you can make your way to the nearby museums and public gardens.

The crown jewel of its industrial heyday was the IC’s Great Central Station. Not only was it responsible for receiving countless tons of material and resources from around the country, the Station also served as a hub for passengers and commercial enterprises.

Perhaps an avatar for the city it called home and the citizens it served, Great Central Station proved greater than the Great Fire. Despite the fire destroying much of the New East Side real estate at the time, the station remained in operation for decades afterwards despite significant damage, eventually succumbing to Chicago’s exponentially increasing population.

Today, those living in the New East Side can walk the grounds of the old station by simply visiting Millennium Station, which sits where the old terminal once did.

The 15,000+ modern residents that today call Chicago’s New East Side neighborhood their home expect a distinctly different experience from that of their great-grandparents.

In place of the endless tracks are a Mariano’s grocery store, countless (delicious!) restaurants and eateries, an expansive outdoor green space and playground. Plus the youngest sibling to Chicago’s iconic skyline: the 28-acre Lakeshore East Development.

The brainchild of Magellan Development Group, the Lakeshore East Development injected a $4 billion investment into the New East Side neighborhood.

The area boasts a balanced, eclectic mix of architectural styles. They range from modern and chic New East Side apartments and high-rise condos to traditional Chicago townhouses and ending with contemporary glass-fronted stores and restaurants. Related: Buying A Chicago High Rise Condo.

Magellan’s chief executive officer, Joel Carlins, in an interview with Crain once said of the project, “The concept was to create a village in the heart of the city.” When you visit and see everyone living in New East Side, walking and playing in the park, it’s hard to argue with him.

“New East Side apartments, condos and townhouses are priced anywhere from around $300,000 to over $1.3 million. They naturally vary based on location, views, amenities, and more.”

The New East Side’s mesmerizing “Aqua” is a stunning design by Jeanne Gang. Here you can find New East Side apartments for sale and for rent.

Other major projects ringing Chicagoans who find themselves living in New East Side include the Illinois Center, Buckingham Plaza, and the Aon Center (formerly known as the Standard Oil Building). In other words, New East Side real estate isn’t short on skyline stature.

While its tempting to focus on the towering structures that make up much of New East Side real estate, much of the area’s history and uniqueness comes from underneath. Residents living in New East Side can claim a singular piece of Chicago’s history. Namely, the triple-level roadway system, most common known as Wacker Drive.

Still in regular use today, the three-tiered roadway allows maximum use of space that’s already at a premium.

Trucks and delivery vehicles use the lowest level of the system to make their rounds and deliver their supplies. Thus minimizing traffic on the upper levels. In addition to serving a practical purpose, Wacker Drive also changed the landscape of New East Side real estate.

To get building permits, the Aon Center and One Prudential Plaza had to purchase the airspace rights above the roadway. A unique deal back then to be sure.

If you find yourself in the area in the middle of March, join the crowd and watch the Chicago River be dyed green. And if you’re tired of being cooped up throughout the cold winter nights and simply need to escape, for a few hours, wander down the street to Maggie Daley Park and strap on a pair of ice skates.

Another big advantage of living here is the proximity of Park at Lakeshore East. It is the neighborhood gem. It’s tucked between the New East Side apartment and condo high-rises and has been recognized for its lush landscape. It is appealing to all who appreciate a large but secret city garden.

From historic roots to modern convenience, living in New East Side / Lakeshore East has it all. With Chicago growing every year, it’s worth exploring its newest neighborhood hidden in the heart of its skyline.