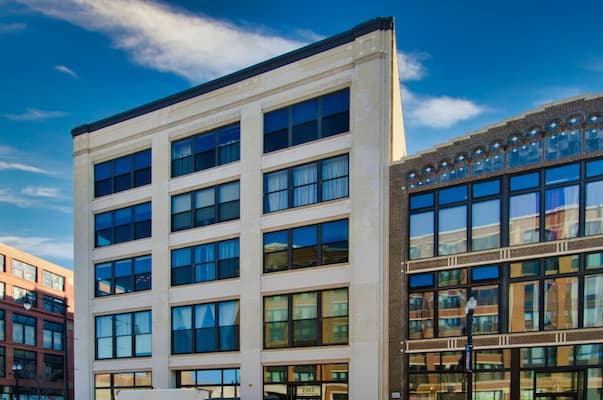 The Motor Row District is located near McCormick Square on Chicago’s Near South Side. As the name implies, the district was once home to a busy strip of auto showrooms. But for decades many of the old showrooms along Michigan Avenue sat empty. Today, many of these historic properties are being converted into lofts, condos and retail storefronts.

Where is Chicago’s Motor Row District?

The primary section of Chicago Landmark District Motor Row runs south along Michigan Avenue from E. Cermak Road until the Stevenson Expressway. This is the area just west of the McCormick Place convention center. Motor Row is in the 60616 zip code.

Motor Row was developed as an easily accessible urban area for consumers to buy and repair their cars. It is said that over 100 different makes of cars were sold here in its heyday. These include included Ford, Buick and Cadillac. Brands that no longer exist but had a presence here include Hudson, Marmon, and Pierce-Arrow. The area has interesting history beyond automobile showrooms. For example, it was also home to The Chicago Defender, a nationally known newspaper and historic voice for Chicago’s African American community. The area has musical roots as well with many famous blues and rock artists recording here including The Rolling Stones. Today Motor Row District is a Chicago Landmark and listed in the National Register of Historic Places.

Is Motor Row A Good Place To Buy A Condo Now?

The Motor Row District is oozing with urban grit and vintage appeal. And there’s a lot happening here that could make for a bright future. For example, recent significant developer commitments, developer tax incentives, infrastructure improvements, a new arena and some major new hotels.

In recent years investors have acquired the historic Motor Row buildings with plans to convert these industrial spaces into Motor Row lofts, condos and retail storefronts. In addition, the City of Chicago envisions Motor Row transforming to a music and entertainment district that meshes nicely with McCormick Place.

Investors have been attracted in part by tax incentives. These incentives are made available via the federal opportunity zone program. That program allows investors to defer or avoid paying capital gains taxes if they redirect profits to low-income neighborhoods like Motor Row just west of McCormick Place.

Plus, if you’re thinking of buying Motor Row real estate consider that the area has recently added a:

Talk with us about Motor Row real estate.