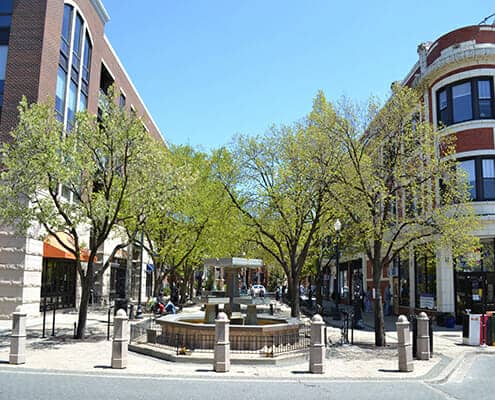 Lincoln Square real estate is primarily a blend of single-family homes and six-flat brick apartment buildings some of which have been converted to Lincoln Square condos for sale.

Living in Lincoln Square Chicago means enjoying a neighborhood filled with old world charm, excellent parks and a wide array of local restaurants and cafes. Moreover, Lincoln Square is an easy commute to Downtown Chicago via the CTA Brown Line.

Here you’ll discover what’s best about living in Lincoln Square including answers to the following questions:

Many of the buildings were built in the early 1900’s. In addition, there are plenty of new construction condos peppering the neighborhood.

From the 3,000 square foot outdoor mural of a German landscape to the 19th century Lombard street lamps donated by the city of Hamburg. As well as the authentic old Brauhaus Restaurant.

The population density doesn’t feel as high here as many other Chicago neighborhoods. This gives the neighborhood a more relaxed feeling, in between city and suburb. Micro neighborhoods within the Lincoln Square Community include Ravenswood, West Ravenswood, Ravenswood Gardens, parts of Wolcott Gardens and Budlong.

Lincoln Square itself was formed years ago by blocking off Lincoln Avenue on one end. Life here centers around the square which gives the area a small-town main street vibe. There’s an interesting arch over the entrance to the square.

Lincoln Square Chicago offers public schools and a wide variety of private schools. The best way to verify the public schools service a property address is to use the Chicago Public School Locator.

Here is a list of Lincoln Square public schools:

Here is a list of Lincoln Square private schools:

There are three primary parks in the Lincoln Square community. They are:

An average commute to Downtown Chicago from Lincoln Square using the CTA Brown Line is about 45 minutes. And out to O’Hare about 50 minutes. Driving to each takes about a half an hour unless there’s a traffic jam.

In addition, buses run on Lawrence and the Metro North Ravenswood stop is only five blocks from Lincoln Square.

On the square there are a plethora of annual events and activities to enjoy. For example, the Summer Concert Series, the Chicago Folk & Roots music festival and the German-American Fest.

Another highlight is the expansive and impressive Rosehill Cemetery which sits on the northeast side of the neighborhood. Here you’ll find some amazing architecture and is home to loads of famous Chicagoans and is worth a tour for sure.

Other attractions in the area include the Old Town School of Folk Music, a large, green park with softball in the summer, and a seasonal farmers’ market right by the El station.

Lincoln Square has plenty of locally owned independent businesses. For example, The Book Cellar. It’s a small independent bookstore with a really cool vibe. A worthy business to support and a relaxing place to while away the time just perusing their wide selection of books. Another interesting shop is the Merz Apothecary which dates from 1875. Here you’ll find all sorts of unique and natural products.

The food in the neighborhood is good but mostly not fancy. Most neighborhood restaurants offer a relaxed vibe. There are plenty of bar-and-grill style restaurants, as well as pizza places. Plus theres a good variety of more interesting choices including Thai, French and Japanese. If you crave German food you can find it at the Chicago Brauhaus. And if you’re lucky you’ll catch some live German music there as well.

Lincoln Square was founded by Swiss, German, and English immigrants in the 1830s and 40s. At that time, much of the area was still farmland. This farmland transitioned to residential property in the 1890s. Greeks flocked to the neighborhood from 1890 through the1920s.

When in 1956 the Lincoln Square shopping area needed a boost, local merchants erected the Abraham Lincoln statue as an attraction. In 1978, they blocked off one end of Lincoln Ave rerouting traffic to create the pedestrian “square” surrounded by European-style shopping. To learn more, visit the Heart of Lincoln Square Neighbors Association.

Lincoln Square is bordered by Foster on the north, Montrose on the south, Damen on the east, and the Chicago River on the west. It sits in zip code 60625 with Ravenswood to the east, Albany Park to the west, West Ridge to the north and Northcenter to the south.