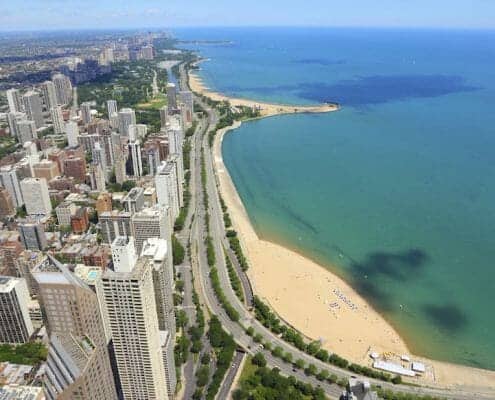 Living In The Gold Coast

Living in Gold Coast means enjoying some of the city’s finest restaurants and plenty of nearby cultural attractions. For example, Millennium Park, the Chicago Symphony Orchestra, the Lyric Opera and the Art Institute.

In the summer, Gold Coast residents enjoy weekly farmers markets, spending time relaxing and soaking up the sun at Oak Street Beach and walking their dogs in area beachfront parks.

Neighboring communities include Near North and Streeterville. Gold Coast has two zip codes 60610 and 60611.

The Gold Coast is known for it’s high-rise condos along the lake. As it is as well for the gorgeous single-family homes that abound in this neighborhood.

The Gold Coast is also noted for its gracious turn-of-the-century historic landmark homes and Queen Anne and Tudor Revival co-ops make up much of the housing.

In recent years, developers have added a wide variety of new housing including some amazing condos.

Whether you’ve got a historian’s mind or traveler’s heart, picturing the great city of Chicago is practically impossible without envisioning throngs of people wandering the Magnificent Mile shopping for needs, wants, dreams, and more.

Steeped In Trade And Commerce

From its earliest days, Chicago’s history is steeped in trade and commerce.

For example, lining its classic streets, Gold Coast real estate and retail is some of the most expensive in the country.

And living in the Gold Coast means calling home an area that was once the second-most affluent neighborhood in the country.

If shopping is staple of Chicago reveries, the Great Fire was the cornerstone on which the modern city is built. Literally, much of the area used rubble from the fire as an underlayment for its various foundations.

The inferno that consumed so much of the city towards the end of the 19th century ensured that the face of Gold Coast real estate would be changed forever.

The ashes of the tragedy saw sweeping reforms throughout the city’s building and residential codes. And the result was that the faces of those living in the Gold Coast went from average worker to monied elite.

The Influence Of Potter Palmer

The leader of these wealthy emigrants finding themselves living in the Gold Coast was Potter Palmer.

A business magnate who made his fortune opening the first dry goods store that focused on women. Potter separated himself from other businessmen of his day in two ways. First, by allowing customers to take home goods to inspect. And second, he instituted a no-questions-asked return policy. This company would, eventually, become the famous Marshall Field & Company.

Next, following the Great Fire and subsequent loss of many of his buildings, Palmer applied for and received a $1.7 million dollar loan. The loan was the largest ever awarded to a single individual at the time. Now with money in hand and vision in mind, Palmer proceed to invest heavily in Gold Coast real estate.

For example, he purchased the swampland on the north end of the area, dredging and reclaiming it, eventually turning it into Lake Shore Drive.

Likewise, he worked to move the city’s commercial district from Lake Street, which ran east/west, to State Street, which he would subsequently widen to handle the new traffic from those living in the Gold Coast and beyond.

It was then, under the shadow of the castle-like 42-room Palmer Mansion, that droves of other magnates and a veritable list of who’s who from Chicago to make the decision to start living in the Gold Coast.

A century of influx, investment, and infrastructure later, and its clear that Palmer’s vision for Chicago’s Gold Coast has thrived.

For example, the Gold Coast was the second wealthiest neighborhood in America during the 1980s. Second only to Manhattan’s Upper East Side.

And it’s mixture of mansions, row houses, high rises, and historical buildings combine into a unique microcosm of Chicago’s tendency to remain rooted in its history while keeping its eyes on the future.

Chicago’s Gold Coast also offers plenty of condos and apartments from which to choose.

When a neighborhood counts historical sites such as buildings by none other than Frank Lloyd Wright’s mentor, Louis Sullivan, it’s no wonder the entire neighborhood was placed on the National Register of Historic Places in 1978.

Built in the 19th Century, the Charnley-Persky House is among the few residential works left from Sullivan’s career. A museum today, the structure boasts details and features developed by Wright while he was still a draftsman at Sullivan’s office.

Likewise, the district where the home itself is located a treasure in and of itself. Specifically, the Astor Street District, named for the visionary John Jacob Astor who never actually lived in Chicago, found its residents not simply living in the Gold Coast but in some of the most lavish and ornate homes in the entire city.

Living In The Gold Coast Today

Living in the Gold Coast today means living in one of the best walkable Chicago neighborhoods. Even with economic change and population shifts, Gold Coast real estate remains at the top of the United States’ list of wealthiest neighborhoods. And these days there are not just mansions but also plenty of stunning Chicago Gold Coast condos from which to choose. Why not buy a condo on Magnificent Mile?

As of 2011, Gold Coast was ranked at an impressive 7th, registering a median annual income of over $150k.

It is perhaps no surprise that America’s most prestigious and classic shopping district calls Gold Coast real estate home. Oak Street, among those who know, is an area that needs no introduction. Beset on all sides by high-end boutiques and specialty stores, the area is a beacon to those with specific taste and the money with which to sate it.

Though considered by some an extension of the Magnificent Mile, Oak Street boats a much higher concentration of elite brands. Such is the allure to be part of this intimate, tree-lined shopping experience that newer stores have spilled off the main drag and begun taking over nearby Rush Street.

Magnificent Mile; Shopping And Much More

Naturally, no discussion of Gold Coast real estate is complete without mentioning the Magnificent Mile.

Stretching the length of the neighborhood, from its meeting point with Lake Shore Drive to its meandering flow into the New South Loop, Michigan Avenue is the focal point of the city, where tourists and residents spend our few summer days.

Shopping, restaurants, business, tours, galleries, and more ensure those living in the Gold Coast and those just visiting always have something to do.

If you’re looking for help understanding Gold Coast real estate, or would like more information on living in the Gold Coast, reach out, we’re neighborhood experts.